When I heard about the new pasta from Quest Nutrition, I became quite excited because I love everything this company comes out with. It took me a while to get my hands on a package of these guilt-free noodles, but I finally did a couple of months ago.
I was given the spinach fettucine variety, which contains 20 calories per serving (2 servings in a bag). The noodles are very low carb and gluten free, comprised of 100% soluble fiber from the Konjac root, which is also known as glucomannan. I kept waiting for a time when I would finally feel compelled to try it, and that time coincided with a day in which I was constantly ravenous. I walked into the kitchen and figured that consuming Quest noodles would be an excellent way to fill me up and would also give me an opportunity to finally try them.

I hadn’t heard about the odor imparted by the alkaline water that is used to pack the noodles in, so I was a bit alarmed when I opened the package and was assaulted by a strong, SALTY (weird how it actually smelled salty!), ocean smell, kind of like strong seaweed. I thought maybe the noodles had already gone bad! My cream Burmese Kazu, who by the way is a FREAK for seaweed, jogged into the kitchen to investigate and was convinced that I had opened a package of seaweed, so we did a little dance in which she kept jumping on the counter and I kept removing her from it. Once I rinsed the noodles, the smell went away and so did my little seaweed fanatic.

The noodles are very slippery, and have a chewy, slightly rubbery consistency when you eat them, but they hold sauces very well, and they cook up lightning fast. A minute in the microwave does the trick. I added shredded chicken breast, fresh garlic, black pepper, onions and 2 tablespoons of spaghetti sauce and was very happy with the outcome. I honestly tried to restrain myself and have one serving, but these noodles are so guilt free that I had 2 servings and was satisfied for over two hours. After trying these noodles, I think I might have to keep a supply on hand for those times when I am starving and need to throw some food bulk into a meal. Thank goodness for Quest Pastabilities!

You can order direct from Quest Nutrition: 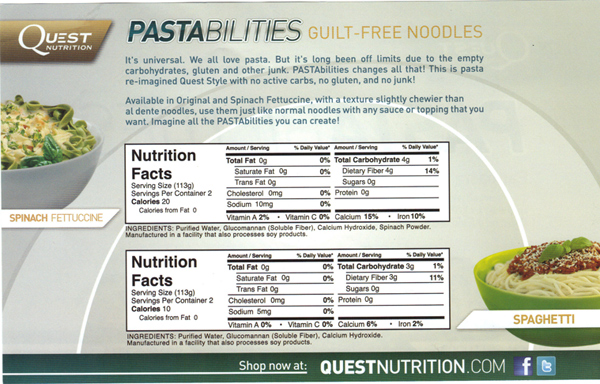 One thought on “I Finally Tried Quest Pasta”