As a result of my Japanese heritage, my palate has always been primed for ramen.  I’m not talking about the economical dried version which has become a rescue meal for most monetarily challenged college students (admittedly, I availed myself of this habit when I was a struggling college student and also holding down two jobs).  I’m talking about authentic, Japanese ramen which can be found in ramen houses in Japantown areas around the United States, as well as ramen shops and yatai (stalls) throughout Japan.  A steaming bowl of authentic Japanese ramen is a masterpiece, full of slurpy golden noodles, briny broth, meat, and vegetables, irresistible and unforgettable.

There are over 32,000 ramen houses throughout Japan, and there are enough ramen varieties and regional variations to steep your fascination for this delectable soup.  It is quite common to see long lines of people spilling onto the street in anticipation of a bowl of heaven from the more popular noodle joints.

In the months leading up to my trip to Japan, which took place in March of 2020, ramen was the dish I was the most excited about eating while in my maternal grandparents’ native land.  Even though I am supposed to avoid wheat and eggs, I was NOT about to deprive myself of ramen while in Japan.  I ended up paying the price every single time I consumed a bowl of ramen, developing abdominal cramping within 20 minutes after ingesting each bowl of those incredible noodles.  Then the next day, I was ready to eat more ramen, even though I knew full well that my belly would writhe in digestive protest.

There wasn’t a single bowl of ramen I had while in Japan that was less than spectacular, and I truly got a kick out of the bizarre yet efficient way in which most ramen houses had their patrons order (basically, you order from a station and pay through it as well, without any human interaction).  I was also intrigued by the distinct regional variations which popped up depending on what prefecture I was visiting.  Curious about the main types?  Click here to learn more.

I quickly noticed that in Sapporo, miso ramen was featured in many of the ramen-ya.  And before you think it’s just a basic miso, noodle masters add in fresh garlic and ginger and simmer with pork broth for an unbelievably tasty concoction. 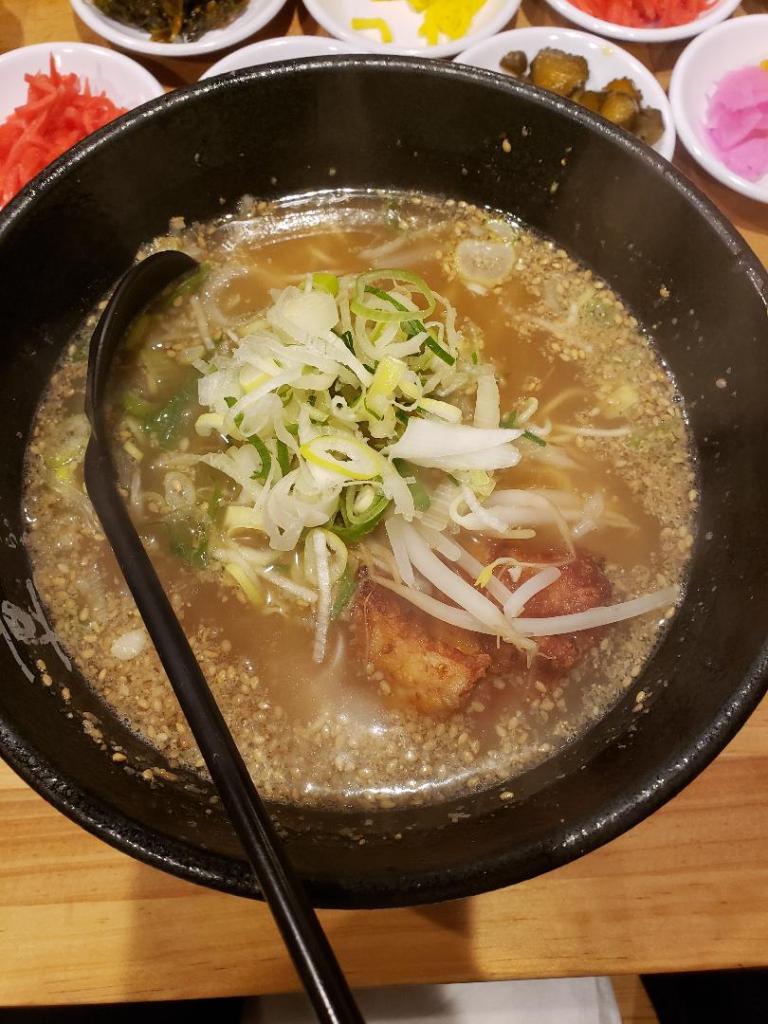 I had both shoyu ramen (first image above) and miso ramen while in Kyoto, and loved both.  Then as I headed further south, I encountered creamy, extremely flavorful broth.  In Okayama, I encountered a specific type of  tonkotsu style broth, made from slow simmered pork, but with Okayama-specific seasonings.  Delicious.

Then I arrived in Kumamoto, my grandmother’s birthplace, and noticed that the ramen houses featured a very milky, rich, flavorful broth which was also made from pork bones for many hours.  Though I am not a big consumer of pork, I was happy to ingest it daily as part of my almost daily ramen indulgence.

Obviously with all the ramen around, I didn’t follow a low carb diet.  In fact, I had rice balls to snack on whenever I rode the shinkansen (bullet train), and I had a devil of a time finding high protein meals or snacks of any kind.  So I just allowed myself to enjoy the constant carb bump for 2 weeks straight. If you ever travel to Japan, don’t deprive yourself of ramen, rice, mochi, manju, and other carb-heavy foods.  You will be moving around so much during the day that you will burn off the carbs pretty steadily.