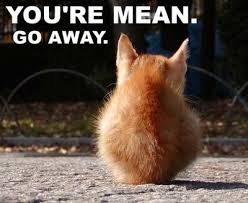 It certainly seems to me that people have been extremely edgy these days, and I keep running into them. I know that a far more evolved response to people who spread negative energy is to approach them with compassion, but my sass level has been amped up lately, largely due to the fact that I am deep in contest prep and dealing with a ton of petty frustrations in my life. So at this point I will just hate the haters, until my level of enlightenment enables me to come from a place of neutrality, because it sure isn’t going to happen ten days before a competition!

Here’s a prime example of the weird and random stuff that has been thrown my way. The other day when a dog suddenly jumped on me and scratched my leg, and I went, “owww!”, the owner decided to get all snippy, saying it wasn’t HER fault the dog jumped on me, and when I said to let it go, she KEPT talking to me, getting literally up in my face, screaming, “No, you don’t understand!” I had to walk away from her nastiness.

Thankfully that incident was isolated, but one day every week I deal with the meanest people on the planet. There is a valet where I need to leave my car when I work at one facility, and it is run by four incredibly rude men who never smile, mumble angry things in Spanish under their breath (which I can UNDERSTAND), and get upset when I ask them for a receipt each time. I know they deal with an upper crust clientele which can be very demanding, but I certainly don’t see the point of being unfriendly to everyone who has to go through the valet there. I drive away with such a sense of relief, knowing I will leave that ugliness behind.

Lately I have also been getting negative energy from a few individuals who have decided to take issue with some of my social media posts. I do not tolerate such energy and always automatically block them, and if they are especially nasty or threatening, I will file an official report of abuse. I realize that I am more susceptible to such contentious people because I have built a name for myself and I put myself out there constantly, but it is not fair to blast me when my posts are primarily meant to inspire my fans and followers and entertain friends. The fact that some people go out of their way to be mean and to spread hate is mind-boggling to me. I begin to wonder what kind of karmic load they are carrying to spread so much negativity.

I am trying to hold onto the idea of a force field of positive energy around me, and hope it will somehow protect me from any further incidents before I step onstage. Perhaps this concept will blossom into compassion at some point, but this is definitely something I need to work on.

What is the best way to defuse hostility? It is always best to refrain from reacting to it. Physically walking away, ignoring hateful statements, employing the blocking feature on social media sites, email, and cell phones, smiling at the person who is being difficult can all work in neutralizing the bad energy.

One thought on “Block The Haters”