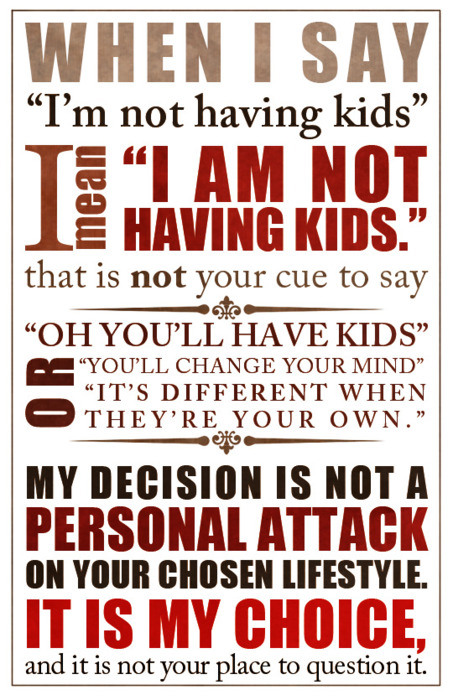 People are continually amazed when I reveal my utter lack of desire to have children. Though I have found myself pondering the concept of having children while in relationships (including my most recent one), I find that as a single woman, I truly don’t see myself ever pursuing an opportunity to have a child. I have felt this way my entire life, even when I was married, and knew in my heart that unless a man swept me off my feet and somehow convinced me that having a child would be a great idea, that I would never willingly sign up for motherhood. Yes, I have come very close to agreeing to the whole kid thing, and I think I am probably still at risk of being somehow convinced that the idea might fly, but I would never make such a decision on my own. I have NEVER been the kind of woman who has watched children playing, or has seen babies in a nursery, and thought, I want one! I don’t yearn for the mother-child connection, and I don’t feel the need to create a mini-me.

There are a multitude of reasons besides my general lack of interest in the concept of having children which support my decision to remain child-free, but the three main reasons are:

1. KIDS ARE EXPENSIVE: Raising a child is unbelievably expensive. Be prepared to spend $245,000 to raise a child in the United States from birth at 2013 up to age 18. Here is a reference article so you can see the breakdown of costs:

This is insane to me. I can barely get by as it is, and cannot imagine dealing with the financial burden of raising a child. No thank you.

2. TOO MUCH ON MY PLATE: I have so many projects that demand all of my time and focus, and am well aware of the fact that ALL of that would crumble if I were to have a child. Since I have no intention of redirecting my attention, no children will come into the picture. I certainly would never want to be a neglectful mother, and that is why I would relinquish all of the activities (EXCEPT gym time and eating clean!) that consume the bulk of my time and energy. I am not selfish enough to rob a child of all that he or she should experience, and would make every sacrifice to send the child to the best schools and provide everything possible. That would mean the end of all that I have known in my life as an independent woman.

3. I VALUE MY FREEDOM: It is pretty liberating to be able to leave at a moment’s notice (provided it doesn’t conflict with my work schedule) to go out of town, pop over to a store to run an errand, go out with friends from time to time, or just take a rare nap in the middle of the day. If I had a child, I would have to plan EVERYTHING in advance, arrange for child care, or take the child with me, along with diaper bag, formula, etc. I would feel so incredibly encumbered that I know my spirit would suffer.

For those of you who wonder if I feel any sadness over being childless, I can tell you without hesitation that I value my freedom far more, and as a result, couldn’t be happier about the fact that I have no children. People still seem so shocked by that, as if an adult is supposed to feel some type of longing for parenthood. Society often regards people who choose not to have children as somehow inadequate, which is ridiculous, since those of us without children often have schedule flexibility which people with children can usually only fantasize about, and we have just as much value despite the lack of progeny.

I also find it extremely irritating and condescending when a WOMAN asks me if I have any children, and upon my negative reply, says, “Oh, yeah, that’s why you look so good.” This only prompts me to bust out photos of women in the fitness industry who have borne as many as SIX children and who rock washboard abs and fantastic muscularity and conditioning throughout their bodies. The desire to keep my body in its best shape ever has been a minor factor in my decision to avoid having children, but it by no means has been a primary reason. Fit women have proven over and over again that it is possible to bounce back into great shape after having children.

If you’re worried about me being child-free, remember that I love the flexibility and freedom in my life. I have pets whom I love dearly, and I have incredible friends. I don’t perceive any hole in my life because I never bore a child.