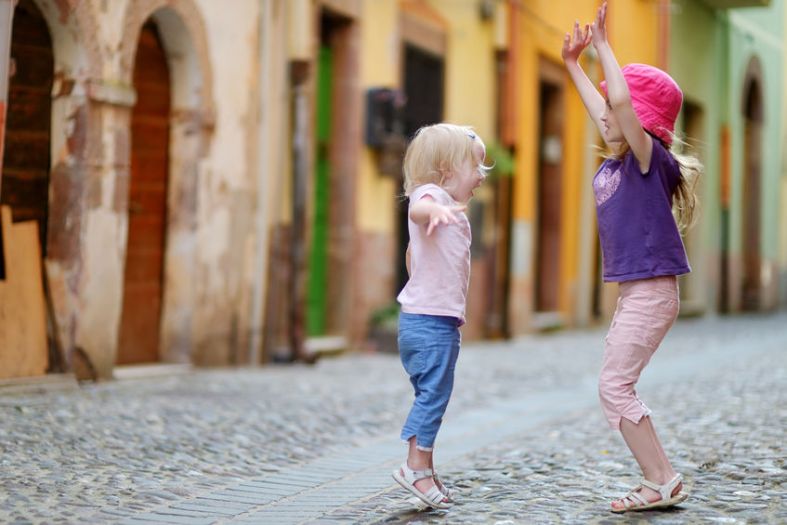 Have you ever given any thought to how children move? The most fidgety of kids will move constantly, and will exhibit a freedom of movement. Children as a whole are far more active and naturally athletic than most adults. Movements such as swaying from side to side, swinging arms, fidgeting, jumping, and skipping are all the dominion of the child. Ordinarily, if an adult dares to move in that manner, he or she would be regarded, and often rightly so, as bonkers.

So what happens to an adult when he or she is allowed to move freely like a child, allowing whatever impulse emerges to direct movement of body parts?

There is one yoga instructor at the yoga studio I frequent who has a habit of encouraging the students to move and shake their limbs, wiggle their hips, and just let loose during one portion of her kundalini yoga class. Do students feel silly when they begin to move? Absolutely. Does everyone begin to enjoy the freedom that such movements can confer on the body, mind and spirit? Oh yes. It is incredibly liberating to be able to shake it like you just don’t care, all in a comfortable and non-judgmental environment.

I think the next best thing to being in a kundalini yoga class with a cool yogi like the one I mentioned, would be to take a dance class, or take part in freestyle dancing at a local club. It’s a great way to de-stress and have fun in the process. 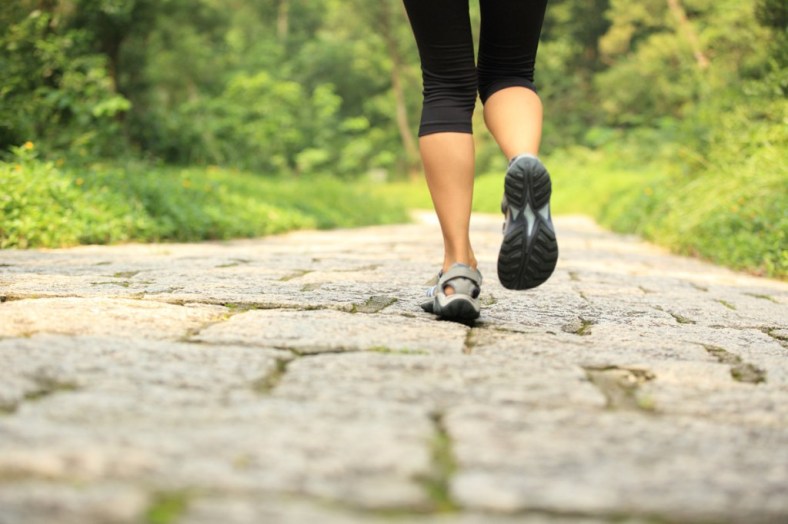 Please check out my latest article for American Fitness Educators which discusses minimalist footwear! Original post can be found at:

Are there benefits to training in minimalist footwear? Studies have demonstrated that training while wearing minimalist shoes results in enhanced performance due to greater foot pliability and a closer approximation to a barefoot stance. Since our feet adjust to wearing raised heels over time, it can be incredibly challenging to keep our heels on the ground while performing exercises like deep squats. Proponents of minimalist footwear may even argue that barefoot is best for heavy weightlifting, but the risks of exposure to microbes or hazardous fragments of glass, metal, or rocks, make minimalist shoes a much more feasible choice while at the gym.

Dysfunctional movement patterns become established throughout the body over time. Conventional athletic shoes can often contribute to ankle and foot dysfunction because they inhibit natural foot action. If you don’t believe it, then try to perform some of your physical activities barefoot and see how well, or poorly, you perform. Chances are that the impaired mechanics in the feet and ankles will make it difficult at best to perform those activities. By gradually switching over to minimalist footwear, an athlete can essentially correct improper foot mechanics and optimize kinetic feedback throughout the body during movement.

Conventional athletic footwear features a cushioned heel which also can compromise power. In contrast, minimalist footwear features little to no heel, and the soles are very thin and malleable, so they allow the joints in the foot to move and adjust to weight loading movements. In addition, the heels and midfoot make solid contact with the floor, causing more activation in the glutes and hamstrings. Studies have demonstrated that people who wear minimalist footwear develop greater strength in their legs and feet, since more power is transferred from the working muscles, through the feet, and into the movement. Plyometric movements and sprint power will also be enhanced while wearing minimalist shoes.

A 2011 study by Squadrone and Gallozzi assessed the ability of experienced runners to estimate the degree of inversion, eversion, dorsiflexion, and plantarflexion, of a slope surface board placed under their right foot while standing. They found that the degree of proprioceptive feedback which subjects received while wearing Vibram Five Fingers® was much more accurate than in subjects who wore a standard running shoe. In conclusion, cushioned shoes conferred a distinct disadvantage when compared to minimalist shoes during assessment of foot position awareness.

How To Transition Into Minimalist Shoes

Anyone who is transitioning from conventional athletic shoes to minimalist footwear needs to do so gradually, since the body has to adjust to radically different proprioceptive input. There have been cases of metatarsal stress which developed after converting too quickly to minimalist shoes. However, once the transition is made, noticeable strength gains should occur. Try spending about 15 to 30 minutes, twice a day, wearing minimalist shoes around the house. After about a week or two, you can try them out at the gym one to two days a week until you become accustomed to the feel of the shoes. Be aware that your gait and foot stance will probably change as you acclimate to this type of shoe.

I am a very fast walker by nature. I am not sure how I became that way because my mom is a very slow, methodical walker. In contrast, I will fly by people, zigzagging my way through a crowd at a rate that surprises others. My default speed is 3.5 miles per hour, and this is the case whether I am walking from my car to the gym, walking up to the bank teller, strolling through the grocery store, or walking along a sidewalk. What pumps my walk up even more is my energy and impatience. I am constantly moving, even tapping my feet when I am forced to sit in one spot for more than a couple of minutes. There have been occasions in which friends have told me to slow down, but when this happens, I have to make an effort to change the rate at which I walk.

Another thing I do rapidly is eat. I developed this bad habit during medical residency days when I had to adopt an eat-when-you-can, pee-when-you-can, sleep-when-you-can mentality. I became accustomed to shoveling food in my gullet, and the habit has persisted out of necessity. More often than not, I am usually in a major rush when I eat a meal, either because I need to get ready for work, I am at work with a patient waiting, or I am about to drive over to a meeting. Even when I have the opportunity to savor a meal, I still have a tendency to rush through the experience.

It seems incongruous for me to have such habits, because I typically conduct myself in a relatively calm manner. I never rush through projects or plans and always have a blueprint of what I intend to do. As a matter of fact, I hate being rushed when I am concentrating or trying to complete a task. But once a plan is in place, I am quick and efficient and work best that way. That same focus and energy goes into my workouts, when I keep moving from one exercise to another, barely resting. It fits my style, and my body enjoys the constant movement.

As someone who was born in the year of the Horse, I know what type of horse characteristics I manifest. Since we are now in the year of the Horse, I am prepared to deal with the amplified energy around me. Those of you who were born in Horse years (1942, 1954, 1966, 1978, 1990) may notice a similar charge in everything you do this year. If you think of how a horse behaves, you will understand horse energy better, and if you have a loved one who is a Horse, you may reach a better understanding when you have an idea of our tendencies.

This Horse personality profile was found on Astrology.com:

Thank goodness for open spaces, because the Horse needs plenty of room to roam! Energetic, good with money and very fond of travel, Horses are the nomads of the Chinese Zodiac, roaming from one place or project to the next. All of this Sign’s incessant activity and searching may be to satisfy a deep-rooted desire to fit in. Paradoxically, Horses feel a simultaneous yearning for independence and freedom. Horses crave love and intimacy, which is a double-edged sword since it often leads them to feel trapped. Love connections tend to come easily to Horses, since they exude the kind of raw sex appeal that is a magnet to others. This Sign tends to come on very strong in the beginning of the relationship, having an almost innate sense of romance and seduction. Horses are seducers in general; check out any A-list party and you’re bound to find the Horse in attendance. This Sign possesses a sharp wit and a scintillating presence; it really knows how to work a crowd. Surprisingly, Horses tend to feel a bit inferior to their peers, a misconception that causes them to drift from group to group out of an irrational fear of being exposed as a fraud. An impatient streak can lead Horses to be less than sensitive to others’ needs. These colts would rather take a situation firmly in hand as opposed to waiting for others to weigh in or come to terms with it. The lone wolf inside the Horse can at times push others away, but this also makes this Sign stronger and is a key to its success. Horses are self-reliant and, though they might lose interest fast in a tedious, nine-to-five day job, are willing to do the work necessary to get ahead. Horses tend not to look much at the big picture; instead they just follow their whims, which can result in a trail of prematurely ended relationships, jobs, projects and so on. This Sign really knows how to motivate others, though, and get a lot accomplished. Once they find some peace within themselves, they can curb their wandering tendencies and learn to appreciate what’s in their own backyard.

Thank goodness the Western astrological aspects of my chart keep me more grounded and modify the typical Horse energy. For those of you who may be curious, my Sun sign is Cancer, with a Virgo ascendant and Moon in Aries. Fun stuff to play with!