Though this video was shot a while ago, my opinion of the Organifi line is unchanged.

Please check out my YouTube review of Organifi products here:

Though I shot and edited this video a year ago, the information hasn’t changed. I love how clean Organifi products are, and encourage people to try them. My favorite products are the Daily Turmeric Boost and the ProBiotic.

I’ve actually run out of both products, and am using other brands right now, but I honestly felt fantastic while on Organifi products. My digestive tract functioned better, and I had fewer aches and pains with the Turmeric Boost on board.

Originally published on mensphysique.com on Sunday, 09 December 2012. The original post was published with white text on white background, so the only way to read it on the site is to highlight the text. To make things easier for everyone, I have copied and pasted the article here for you to read.

Antioxidants have become a hot topic in combating disease in recent years, and the list of these substances has grown thanks to extensive research which has been conducted and disseminated to the public. A particularly powerful antioxidant is curcumin. Curcumin, an extract which is derived from turmeric, has been used in Asian curries for many centuries and has also been used for treatment of arthritis and other health conditions. Only recently has curcumin received attention from the United States regarding its remarkable benefits as a potent antioxidant.

Perhaps the most exciting potential benefit of curcumin is that it may help to prevent and treat cancer by inhibiting cancer cell growth and the growth of blood vessels which feed into tumors. There is some speculation that curcumin can prevent cancer cells from multiplying and is also capable of causing self-destruction of cancer cells. As if this wasn’t enough, there is a possibility that curcumin may prevent Alzheimer’s Disease by decreasing the accumulation of amyloid which characterizes this disease.

Here is a list of other benefits which curcumin confers:
· Accelerates wound healing
· Acts as a cleanser for the liver
· Regulates metabolism and assists in weight loss
· Reduces LDL cholesterol and raises HDL levels
· Decreases severity of inflammatory skin disorders such as psoriasis
· Acts as a natural painkiller

If these reasons are not enough to compel you to add curcumin supplementation into your meal plans, consider the fact that curcumin reduced the COX-2 enzyme in the body, thus decreasing the pain and swelling of arthritis. In fact, recent studies revealed that curcumin was even more effective than ibuprofen (Motrin, Advil) in its anti-inflammatory effects. One particular study in Italy which was conducted on 50 patients, all of whom had confirmed knee osteoarthritis, found a 58 percent decrease in reported overall pain and stiffness as well as an improvement in physical functioning among the curcumin group versus the control group. 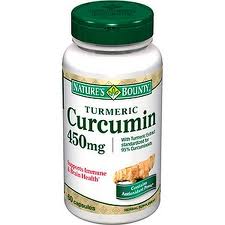 How To Take Curcumin
Some individuals may prefer to ingest curcumin in the form of straight turmeric powder which can be added to meals or tea. However, I prefer to take curcumin in capsule form. If you opt for the capsule version, look for formulations which contain piperine, or black pepper extract. Piperine augments the gastrointestinal absorption of curcumin. Recommended daily dosage is 400 to 600 milligrams per day. For acute flare-ups of arthritis or other musculoskeletal pain, you can double the dosage until the acute phase abates.

Lately I have been in CONSTANT pain from inflammation in my neck, shoulders, elbows, wrists, hips and ankles which has me creaking like the Tin Man from the Wizard of Oz. I wouldn’t mind it so much if the pain patterns were completely predictable, but there have been days when the pain has shifted from one side to another. No amount of massage or adjustment seems to calm things down either. Granted, I have not been as diligent about taking my daily supplements due to almost two weeks of international travel which threw my daily routine off track in a big way. Now that I am back in the States for a while now, I plan to get back into my daily rhythm which will hopefully cause most of my aches to abate.

As a result of the pain I was enduring, I had a massage last week while in Bali. It was an amazing deal at 120,000 rupiah (about $10 U.S.) for a full hour of shiatsu massage, so I jumped on it. What I had forgotten was that shiatsu massage can hurt like a mother^%#@$* due to its focus on trigger points and deep pressure. I was writhing in pain for the entire hour, but figured I needed the torture. Usually if my patients experience deep massage, I will tell them to take arnica or ibuprofen for the next 24 hours to address inflammation, but since I am a doctor (and doctors really DO make the worst patients), and also since I had no access to anti-inflammatory agents, I tolerated the pummeling I got and simply hydrated as much as I could. The next morning, I was in so much pain that I could barely walk, and I couldn’t turn my head at all. Stretching was almost impossible because my range of motion was terrible. Thankfully, my range of motion increased gradually as the day progressed and my muscles warmed up.

After dealing with such intense discomfort for a while now, I think I will take my own advice and resume my daily intake of antioxidants, glucosamine, and turmeric. For those of you who may also be feeling like a poorly oiled tin man, you might want to follow suit.