Olympia is the granddaddy of bodybuilding events, compelling people from all over the world to descend upon Sin City for a weekend of glistening, supertanned muscles, scantily clad bodies, and enough free sports supplement samples to keep everyone amped up with bloated bellies as they walk through the Expo. The Olympia Expo is quite a sensory overload, a smorgasbord of sounds, sights, smells, and tastes! You also should watch out for flying objects since items such as t-shirts are thrown into crowds during hyped-up giveaways at the larger booths. You won’t find too many events in which such action-hero genetic freaks can easily and comfortably congregate. I feel very much at home in such company, and look forward to all the Olympia events every single year.

I love working a booth at the Expo even though it prevents me from seeing most of the competitions that take place in the main arena. I gladly suffer through the sore feet that result from standing and walking all day. Fans and followers will look for the booth I am working at in order to say hello and take a picture with me, and that always means a great deal to me, especially since I know that the crowded Expo hall can be very tricky to navigate when someone is looking for a specific booth or person. Every Olympia is also a great reunion in which I can see many of my fitness and bodybuilding friends from all over the world.

If you have any interest in fitness and bodybuilding but have never been to Olympia, make an effort to travel to Las Vegas one year in late September so that you can witness this incredible event. 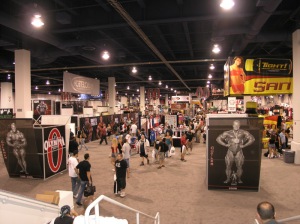 Points and qualifications in the 2014 Olympia Qualification Series are awarded as follows.

To view the Olympia Qualification Series standings, as well as the current qualifiers for Olympia Weekend, visit http://www.iffpro.com, http://www.mrolympia.com or http://www.npcnewsonline.com.

Questions regarding the Olympia Qualification Series may be directed to the Joe Weider’s Olympia Fitness & Performance Weekend office at rchang@weiderpub.com.

Below is the list of IFBB Pro Bikini athletes who will be gracing the Olympia stage this weekend. Cognratulations to all!

This year’s Olympia stage will welcome IFBB Men’s Physique athletes for the first time. Congratulations to all who are competing!

I am thrilled and honored to once again work the Muscle and Performance Magazine booth at Olympia this year! Please come by the booth for free magazines and photo opportunities!

Olympia will take place on September 26th through 29th, 2013 in Las Vegas at the Las Vegas Convention Center.
http://www.muscleandperformancemag.com/

Olympia is looming around the corner, with more total prize money being awarded among the eight different divisions. The big granddaddy is Mr. Olympia, which will award $650,000 to the champion. The 212, Ms. Olympia, Fitness and Figure champions will take home a respectable, albeit much smaller, purse of $60,000 for each division.

Now that Bikini Olympia is approaching its fourth year, with three different women having attained the titles in previous years (Sonia Gonzales in 2010, Nicole Nagrani in 2011, and Nathalia Melo in 2012), the purse has been set at $40,000 for this year.

The two newest divisions in the NPC and IFBB will enjoy their freshman year on the Olympia stage, with correspondingly small purses for Men’s Physique and $10,000 for Women’s Physique. There is no doubt that this prize money will increase in coming years as the newer divisions continue to make their mark in the bodybuilding world.

Here is a summary of the prize money for Olympia 2013: